CVIOG in partnership with the Georgia Municipal Association offers this mandatory training for all newly elected officials in Georgia. Held at the Center for Continuing Education & Hotel.

Terry Crawford was a new city councilman in Ringgold when he attended UGA’s training for newly elected officials a decade ago. He still uses the principles he learned from that training.

“I came away with a good, strong understanding about how I can work best with the people I represent,” said Crawford, now Ringgold’s mayor pro tem. “I learned immediately that you have to work together to be effective. Working as a team, we have done a tremendous amount. We worked together to get a new pedestrian bridge over U.S. Highway 411, for example.”

“This practical training, specifically designed for newly elected officials, helps municipal leaders understand and effectively address the kinds of issues they face every day,” said Laura Meadows, director of the Institute of Government. “By partnering with GMA, which brings in-depth knowledge of all Georgia’s municipalities, we can tailor the information to each community the officials represent.”

Mandated by state law in 1990, the Georgia General Assembly directed the Institute of Government and GMA to introduce new officeholders to the legal, financial and ethical responsibilities of city officials. Besides exploring their roles and responsibilities, first-term officials study government finance and budgeting, planning and zoning, ethics, and staff relations to fulfill the six-hour training minimum set by law.

“Training local leaders is one of the many efforts the University of Georgia is undertaking to strengthen communities across the state,” said UGA President Jere W. Morehead. “I am pleased that our public service faculty are sharing their expertise with the citizens of Georgia in this important way.”

“The knowledge these leaders gain is invaluable,” Hanson said. “It helps newly elected officials understand the nuts and bolts of local government, its complexities and the need for collaboration and teamwork.”

The training helped Albany Mayor Dorothy Hubbard better understand a government budget so she could ask probing questions about fiscal affairs. She also learned the benefit of consensus.

“It’s not personal,” Hubbard said. “Despite differing opinions, we all want to work for the betterment of our community.” 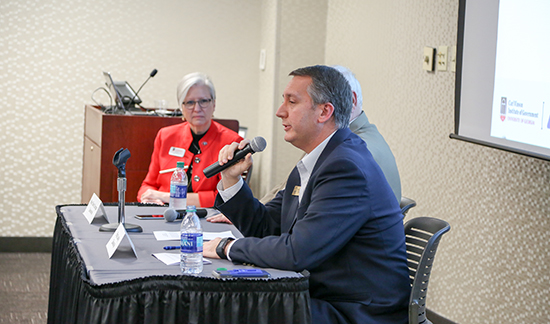