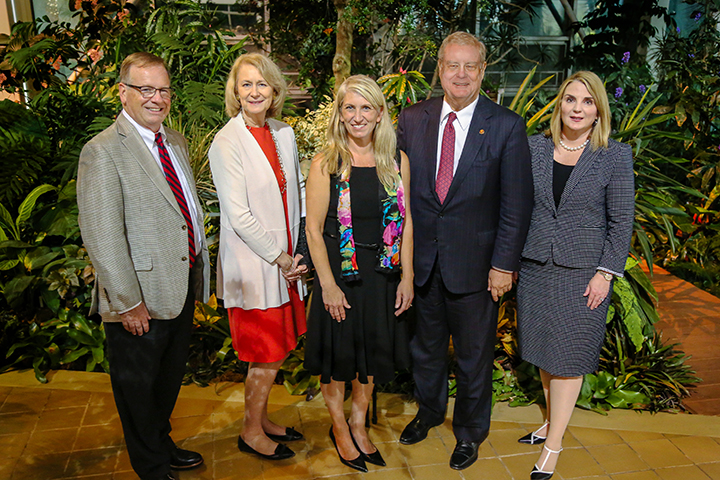 Jim Miller grew up with a mother who enjoyed gardening. When an advisory board for the State Botanical Garden of Georgia began forming in the 1980s, he was a charter member.

His gift of $5,000 was the first private funding the garden received and it forever changed the trajectory of the board of advisors.

“It was symbolic, it set the tone for the whole board to be able to succeed, and it made an incredible difference to the garden,” recalls Susan Duncan, who helped establish the board.

Since then, James B. Miller Jr., as he is known formally, has remained a steadfast, often behind-the-scenes “gentle giant” at the garden, Duncan says. To this day, Miller continues to be active and involved at the garden, giving generously both personally and through Fidelity Southern Corporation in metropolitan Atlanta, where he serves as chief executive officer and chairman.

“Without his support, the garden would not be what is today. He has helped grow the garden from the very beginning,” says Jenny Cruse-Sanders, director of the State Botanical Garden. “He recognized the potential of the garden early on and the impact it could have on education, conservation and research for the university and across the state.”

Miller has supported campaigns for the International Garden, the Heritage Garden, the Flower Garden and the Alice H. Richards Children’s Garden, to name a few. He also supports the annual Gardens of the World Ball, the State Botanical Garden of Georgia’s annual fundraiser, and served as ball co-chair in 1989 with the late Eugene Younts, then the UGA vice president of Service.

“I’ve always liked gardening, I grew up with a mother that liked gardening, and nature is so critical to us for food and life,” Miller says. “It’s amazing how much work, time and effort goes into the garden, but it’s an incredible asset for Athens and what an asset for Georgia.

He most recently contributed to the campaign to build a formal entrance to the Alice Hand Callaway Visitor Center and Conservatory near the upper level parking lots, with an elevator to make the garden more accessible to people in wheelchairs or pushing strollers, or who just have trouble maneuvering stairs.

“When my wife developed arthritis, I became very aware of what it takes to get around,” he says. “It’s also important to me now, personally, since getting a knee replacement and experiencing what many people go through.”

Miller was among the first donors to the accessibility project, said Dr. Geoffrey Cole, who chairs the garden’s board of advisors.

“It’s not just about money, though—he commits to things,” Cole says. “He’s been dedicated to the garden since it started.”

As a unit of Public Service and Outreach, the garden is dedicated to providing a place for not only UGA students, but visitors across the southeast to discover the wonder of nature and the important roles it plays in life.

GIVE TO ACCESSIBILITY AT THE GARDEN