Students dive back into summer camp at UGA

The pool was their ocean. Their underwater remotely operated vehicle was named Rainbow.

Using PVC pipe and pieces of foam, Elsie Summers and other campers at the UGA Center for Continuing Education’s Ocean Discovery Summer Academy designed remotely operated underwater vehicles and then tested them to see if they would work.

“My friend, Katie, and I have always wanted to be marine biologists when we grow up, so camp has been really fun and this is really cool,” said Elsie, a rising seventh-grader. Her friend, Katie Campbell, also was at the camp.

The teams of campers used PVC pipe for the body of the vehicles, foam for buoyancy and metal bars to weight it down enough to go underwater. Three remote control propellors maneuvered the vehicles through the water.

During the weeklong program, campers learned about marine life and the marine exploration that can be done with remotely operated vehicles.

“Since we’re not by the ocean, we bring the ocean to the kids,” said Emily Davenport, program director for the Department of Marine Sciences and camp instructor. “We talk a lot about the deep ocean and why we should care about the ocean even though we can’t see it here in Athens. They get a feel for what it might be like to drive under the water and explore.”

The Summers team’s vehicle, made from colorful PVC, was a little too buoyant when they put it in the Department of Marine Sciences’ pool initially. But after they removed a piece of foam from its frame, they were able to successfully maneuver it under the water.

Thanks to a grant the Department of Marine Science received from the Ecosystem Impacts of Oil and Gas Inputs to the Gulf (ECOGIG) research group, the Ocean Discovery camp was offered at a reduced cost this year, and six campers were awarded scholarships to attend.

Many of UGA’s camps were able to return to in-person participation this year after going online last summer.

“We made a plan for virtual camp this summer, but I was relieved that we got to do in-person instead,” said Ben Thomas, a lecturer in the College of Engineering and an Advanced Engineering Summer Academy instructor. “A big part of our camp is getting to experience the tools and the machines and have safe places to learn about them.” 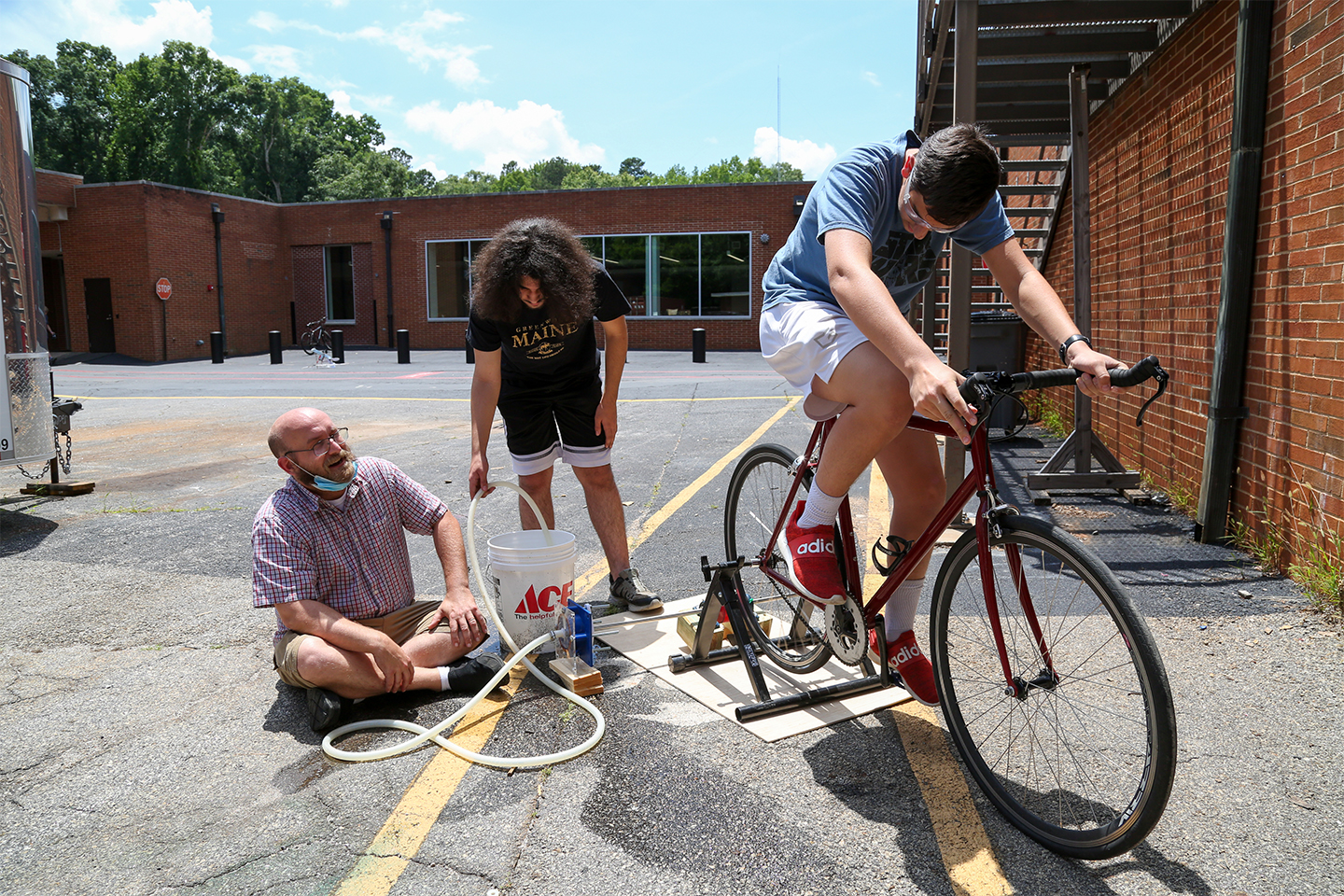 Campers explored the various types of engineering, including electrical, mechanical and technological, and worked on engineering projects. They developed a portable water pump system that could be used in a remote location without running water. One group tried a bicycle-powered pump, while another tried setting up a system with a single solar panel and a battery.

“I’m really learning a lot,” said rising 10th-grade student Kayla Davis. “I love studying science and now I love engineering too because you get to do what you love and build things that are creative.”

The UGA Center for Continuing Education partnered with eight other UGA departments and one non-UGA organization to offer 32 camps this summer, 12 of them in-person.

Fashion design, mini-medical school, coding and 3D animations are among the Summer Academy selections. The American Sign Language Summer Academy is being led by the nonprofit Georgia Center of the Deaf and Hard of Hearing in Atlanta this summer.

Learn more and register at https://www.georgiacenter.uga.edu/youth/summer-academy.